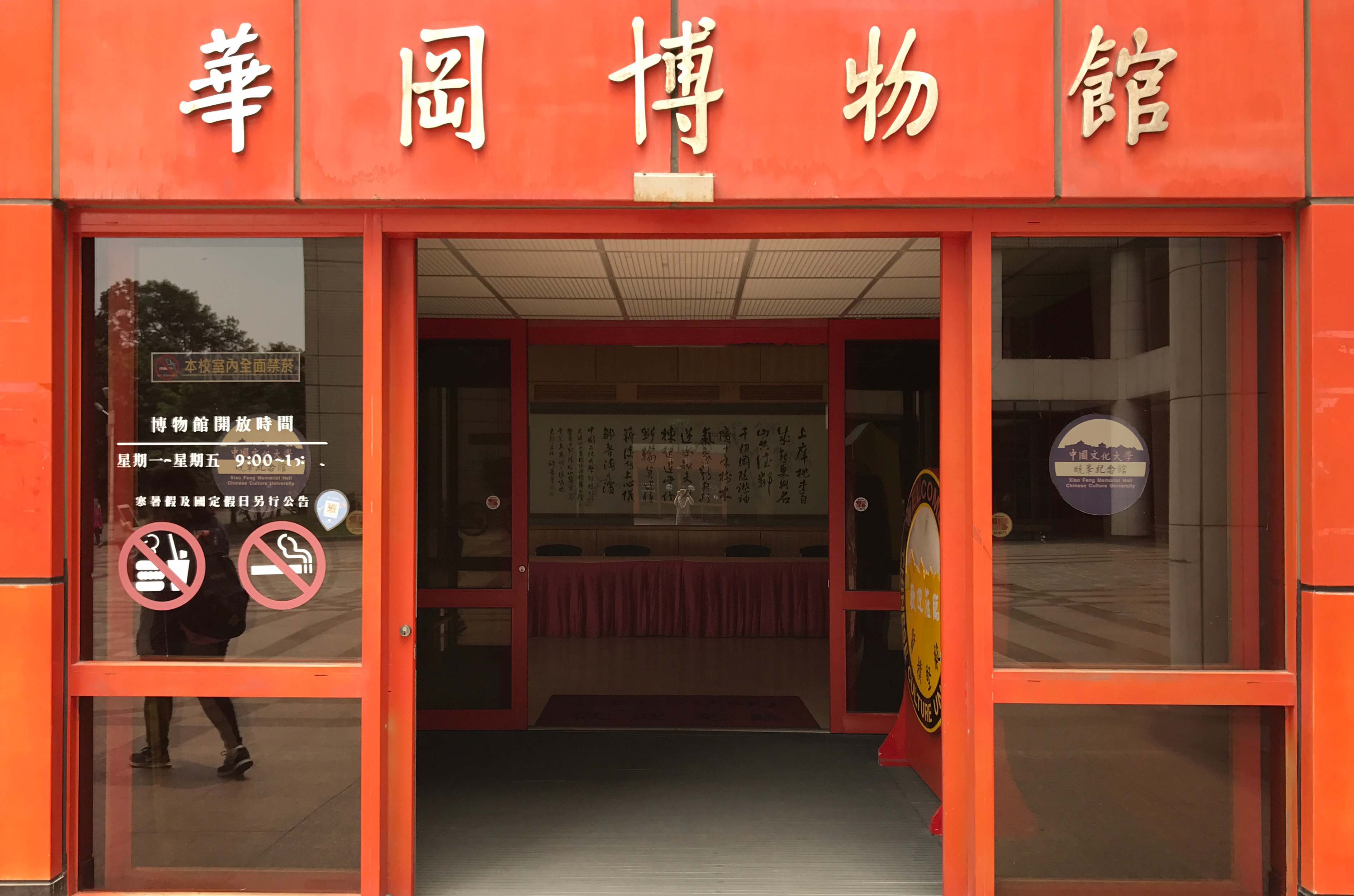 The Hwa Kang Museum, Chinese Culture University (CCU) is the first museum opened by a public university in Taiwan. To celebrate the erection of the CCU Da Cheng building on Mar. 1, 1963, the Hwa Kang Museum (originally named the “Chinese Artifact Exhibition Hall”) hosted the Chinese Historical Artifact Exhibition. The exhibition won the praise of Yao Meng-ku, who remarked “How rare is it to see a university museum to host an exhibition?” Likewise, the Central Daily News released a news report, noting that the exhibition “built a foundation facilitating a Chinese renaissance.” The event celebrating the late Sun Yat-sen’s 100th birthday (held in Nov. 1965), the International Chinese Society Special Exhibition (held in Aug. 1968), and the art contributions of The China Academy researchers subsequently enriched the Hwa Kang Museum’s artifact collection, enabling the museum to organize eye-pleasing and emotionally touching exhibitions. On Mar. 20, 1966, former president Chiang Kai-shek visited the museum. The visit prompted Chang Chi-yun, the founder of the museum, to write the following: “There were three memorable things about President Chiang’s visit. First, he loved Chen Tzu-shan’s oil paintings on revolution history, especially ‘Sun Yat-sen and Chiang Kai-shek.’ He told the guard to have this painting hung inside the National Palace Museum gate in Waishuanghsi. Second, he enjoyed many of the paintings donated by Tseng Hou-hsi to our university, particularly ‘Zigong Going on a Trip.’ He instructed the guard to have it relocated to the Chungshan Hall; this is the painting that you see in the reception room of the Chungshan Hall today. Third, he deemed the 20+ paintings of The Palace Museum buildings created a Russian painter highly valuable, ordering that the guard borrow them from our school for him to view in his free time. All of said paintings were later returned to our university.” After nearly a decade of exhibitions and artifact collection, the Hwa Kang Museum was officially established on New Year’s Day, 1971. Its name was changed by Chang from the Chinese Artifact Exhibition Hall to the Hwa Kang Museum. In the preface of the Hwa Kang Museum Magazine, Chang wrote, “… Refreshing, bright, and impressive. Although visitors may be in awe of the museum being the only museum opened by a university in Taiwan, what they do not realize is that such a feat is the result of many years of hard work. Like they always say, ‘Rome wasn’t built in a day.’”

In the preface of the Hwa Kang Museum Magazine, Chang mentioned that the Hwa Kang Museum featured the following four characteristics: “a wealth of resources,” “a fountain of connections,” “a superb reach,” and “a place with wonderful vision.” “A wealth of resources” refers to the museum extracting the essentials from large amounts of materials; “a fountain of connections” refers to the museum forming a close relationship with The China Academy ; “a superb reach” refers to the school using the museum as its core to ‘museumize’ all corners of the school; and “a place with wonderful vision” refers to the museum serving as a cultural institution offering education, research, and corporate services and complementing the museum library. Chang indicated that “The new trend of modern world universities is combining theory (i.e., education) and practice together to ensure their mutual development,” and concluded that “Museums will have a bright future!”

Because of the Hwa Kang Museum’s efforts in collecting artifacts after its establishment, the art contributions of The China Academy researchers, and donations made by the university’s professors and alumni over the years, the museum houses the most and best art artifacts among university museums in Taiwan. Its modern painting and calligraphy are particularly magnificent and exemplifies the notion of “extracting the essentials from large amounts of materials.” In fact, its artifact collection is unparalleled among university museums in Taiwan and China, and its collection of Puru’s painting and calligraphy rivals those of the National Palace Museum and the National Museum of History. Additionally, its artifacts such as “Han Yutang’s Thousand Character Classic” (volume 2 of 2; volume 1 is in the collection of the National Palace Museum), manuscripts, pictures, and “Twelve Landscape Paintings” (cocreated by Chang Dai-chien and Puru) are awe-inspiring. A Xinhua News Agency reporter once interviewed the museum and later released a report, stating that “A great university must have a great museum.”

Chang Chi-yun founded the museum based on the principles of “following the tradition and incorporating the essence of the East and the West” and “developing the Hwa Kang Museum through Chinese Culture.” The goals were to promote Chinese culture and facilitate a modern renaissance. Chang’s dream was to build the museum, and his visions were modern universities paying attention to artifacts and universities being “museumized.” Such visions subsequently led to the museum and the Chinese Culture University being integrated together, allowing Chinese culture to be promoted, Eastern and Western cultural exchanges to be made, and modern renaissance to be created. As a university museum, the Hwa Kang Museum collects artifacts, performs research, hosts exhibitions, promotes education, and preaches well-rounded development in ethics, intelligence, physique, social skills, and aesthetics, enabling the Chinese Culture University to provide holistic education and its students’ art and literary literacy to be cultivated.

Located by the Yangmingshan National Park, the Hwa Kang Museum boasts breathtaking natural scenery, art, and humanities, signifying the union of geographical, cultural, and humanities-based resources. Additionally, because the museum is situated in the vicinity of Shilin, Tianmu, and Beitou as well as the aforesaid national park, it is imbued with both urban and natural characteristics. Chang hoped that the museum could unite the elements of residence, learning, leisure, and entertainment together. Accordingly, the museum is open not only to teachers and students of the Chinese Culture University, but also to the public (free of charge), providing them “The Third Space” aside from their homes and workplaces. By bringing the museum and communities together, universities become artistic, and art becomes a part of people’s lives, achieving museum publicization and fulfilling the museum’s social responsibilities as a university museum.